Cooperation with Indians has shown me a new dimension of IT

Sitting at a computer and not getting away from the screen? That is definitely not the case for IT manager Tomáš Soukup. He has worked for car manufacturers around the world and many of his codes and systems have reflected his experience with other cultures. Currently, he is working for ŠKODA AUTO on an international project in India. What is this experience giving him?

How long have you been involved in activities in India?

Approximately since 2007, when we introduced the first IT systems for production and logistics management in India. Before that, the Indian branch was only an assembly plant without system support.

Now you are working on the comprehensive and ambitious project INDIA 2.0. What is its goal?

Three companies from the Volkswagen Group operated on the Indian market until 2019: the production plant ŠKODA AUTO India Private Limited in Aurangábád, where cars for various marks from the Group are assembled; then another Volkswagen Group plant in Púné, where we make complete cars; and a company in Mumbai which focused on the sale of the cars made. In the INDIA 2. 0. Project, we merged those three companies into a new company named ŠKODA AUTO Volkswagen India Private Limited (SAVWIPL). We want to break through on the Indian car market, which is a great challenge for European companies.

Where are the headquarters of ŠKODA AUTO Volkswagen India Private Limited?

The newly established company currently has its headquarters in the West-Indian city of Púné, in the State of Maharashtra, where the first production plant is located. The second is in Aurangábád. Additionally, there are several regional offices, such as in Mumbai and New Dehli.

Your IT department in Mladá Boleslav also cooperates with the Indian division. How has it coped with this new challenge?

Quite well, even though the consolidation of companies was very complicated, as it required the reorganisation of all departments and specialised divisions. It was necessary to develop a strategy and to adapt our standards to the future challenges of the Indian market. With Indian IT managers, we carefully chose specialists to focus on networks, servers, databases, productions systems, and SAP. Before the merger, each of the three companies used its own systems. On the basis of system and process analysis with IT specialists and experts from specialised departments, we finally found a compromise. Currently, we are consolidating the systems. This should save us millions of euros, with the greatest savings expected to be achieved thanks to consolidated system support.

How are cars made remotely?

Sending a car in parts to another country to have it assembled there? No, we are not talking about a toy assembly set but about an elaborate system of the Indian division of ŠKODA AUTO. “Today, we are able to manage smaller production plants around the world from our parent plant in the Czech Republic. To put it simply, we send them packages from which complete cars are made,” says IT manager Tomáš Soukup.

“Such a shipment includes, for example, fully painted parts of the body and other production parts which are assembled on the spot,” explains Soukup. This method of production requires cooperating with local experts and often requires implementation of new IT systems that would enable the production of cars.

Given that the Indian division is getting increasingly independent, what is the role of the department in Mladá Boleslav?

Our IT department at Mladá Boleslav is essentially the management company that is above the Indian plant. We develop plans for further development of the Indian plant in cooperation with our strategists and technologists in the Czech Republic, on the basis of an extensive amount of analysis that we created prior to the consolidation. More routine things, such as orders of materials for production, agreements with local companies, or methods of sale, are organised locally. In previous years, we flew to India a lot for two to three weeks at a time. Now, because of the pandemic, we deal with everything remotely.

If the situation with travel improved, would you again start flying to India, or have you discovered, in the meantime, that remote communication is more advantageous?

I think that we would again start to fly. Doing everything remotely is a great trend now, of course, but it is not always useful. When you work on an analysis with your colleagues around a table and speak face to face, not only that you understand each other better, but you also get different ideas than when you meet via Skype and your meeting runs for an hour. From my point of view, on-the-spot communication would accelerate certain steps and processes?

What are working on at the moment?

In the strategy for the INDIA 2.0 project, the use of the Škoda system solution for dealership network management, known as Dealer Management System (DMS), was approved. Our developers are now handing over parts of its code to their Indian colleagues, who adapt it on the basis of local needs and laws. We now have teams on both sides that work together to develop a new product with European experience. In the future, we would like to develop applications not only for the Indian market, but for ŠKODA AUTO, as well. To that end, a new Software Development Centre is being set up which comprises teams of developers of both nationalities. ŠKODA AUTO cooperates with the local Indian branch of VWITS. We want to focus on using modern trends in application development, new technologies, and cloud services.

To what extent can cooperation with India concern IT rookies newly hired by your company?

We are contemplating further cooperation and we have plans with a working title India X.0 or India of the Future. IT experts can go work at the Mladá Boleslav DigiLab or in the SW development centre that I have mentioned earlier. There will be opportunities for students and specialists interested in working for us. Furthermore, India is not the only country in which we work. In the ŠKODA AUTO group strategy, it is responsible for other markets, such as Russia and Northern Africa. 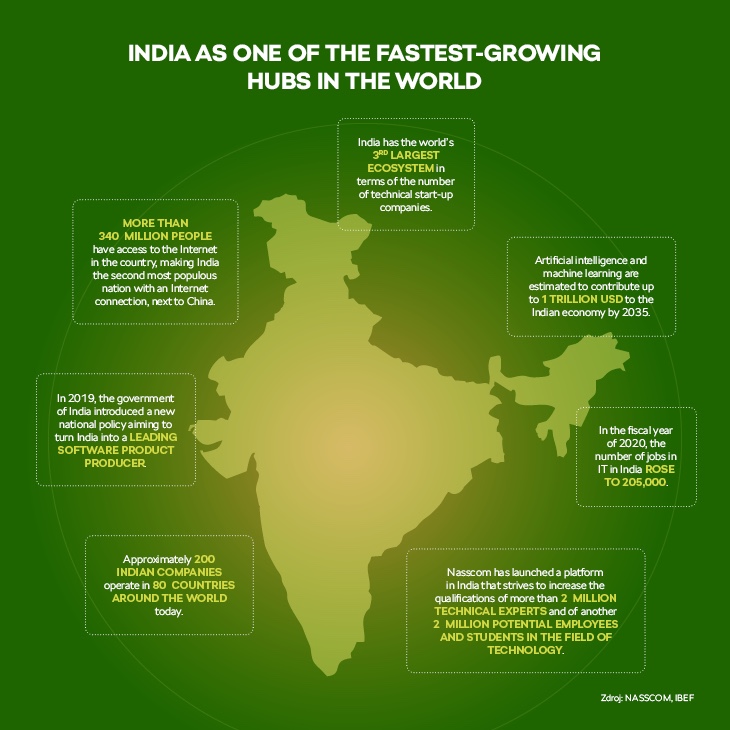 Gesticulation and other habits

What makes India interesting for you as an IT expert?

They say that all of India is one big IT department. There are many skilled young people there who study at universities in India or go abroad for school and then come back with a good education. Their experience and view of IT are enriching, so one can learn a lot.

The cultural differences, however, must be immense.

Yes, but in the end, we have managed. Before the INDIA 2.0 project was launched, we all attended an intercultural management workshop organised by the ŠKODA Academy. Thanks to that we realised how our colleagues in India may be perceiving us and how we perceive them. One of the funny differences was that as a sign of consent, Indians shake their heads from side to side, indicating, that they understand. At the beginning, strange situations occurred when you are trying to explain something, they are shaking their heads and you think that they do not get you. Also, you first have to grow closer with Indians, they are not people to trust you immediately. Compared to Czechs, they take longer to accept someone and start seeing him as an authority.

Intercultural management is a good start to shorten the way to mutual understanding.

Of course, but that is not only about India. I went through a similar workshop in relation to Germany, Russia, and other cultural approaches. Problems are indeed solved differently in every part of the world and one must reckon with that.

In February 2021 ŠKODA AUTO presented the first sketches of its new SUV for India. KUSHAQ has been named after an ancient expression for king in Sanskrit.

Do Indians have a different approach to cars?

When we first came to India with our cars, we encountered a qualitative problem with the cars’ horns imported from Europe. Horns are absolutely key for an Indian driver – by the way he honks, he signals to other drivers whether he is turning right or left, whether he is in a hurry or letting other drivers go ahead of him. We worked with European standards, so we had to find an adequate producer in India who made horns that suited the local need. Our developers must take a similar approach to considering what people in India need.

What other differences are there between Indians and Czechs, aside from the importance of horns?

Our lives in Europe are based on our family, work, and hobbies. Indians do not have many hobbies, because they live in large cities where they cannot go for a run or a bike ride. They are very much focused on their families, work, and technologies. Mobile telephones are key for young Indians. Smartphones are one of the most important things in their lives and they love mobile applications. So, our cars’ infotainment and connectivity must appeal to customers in India.

You talk about Indian projects with enthusiasm. Have you found your calling in them?

Definitely. My life has been greatly enriched by the fact that I can work for a company of ŠKODA AUTO’s size. It has enabled me to travel to diverse interesting countries where I helped with the planning and development of plants. When I go back to Malaysia today and find out that the processes and systems that I and my team implemented there five years ago are still working, I am very pleased. Simply, I can see the tangible results of my work. That is not the norm in IT. Usually, you either write codes or take care of databases or the cables through which data run. But at Škoda, you know that production cannot do without your IT.

STUDY AND RELAX AT ONCE

PUT YOUR DREAM CAR TOGETHER