If we want smart cities, we must trust technologies

Lots of things are smart today. Watches, households, houses… and transport. When will we see self-driving cars? We talked with Aleš Cerman, who works on assistance systems, autonomous drive, and the concept of smart cities.

There has been lots of talk about smart cities in recent years. What is the role of transport in smart cities?

Smart, as well as multimodal and sustainable transport, should help address the problem of jammed roads in cities. Imagine that you commute for work to Boleslav by car. First you are delayed by a traffic jam and then you have to find a place to park, so you get to work late. If you had smart transport in that situation, it would offer a solution that is not only the most efficient but also environmentally friendly.

For example, an application could help by suggesting, on the basis of current traffic and a prognosis of the time requirements, how to get where you need in the time you require. Whether by your own car or by a combination of various means of transport – bus, train, your car, or a shared one, or an electric bicycle. The application will tell you where and how to switch from one mode of transport to the other and will calculate how much time and money the trip will cost you. Finally, you will use the application to pay the fare for public transport or rent for shared means of transport.

But we are already able to develop such an application and most of the technologies required are also available. Still, our cities are not very smart yet. Why is that?

You are right, many of the technologies have been available for some time already. But that is not enough to create truly smart cities. The necessary infrastructure must be built. Our cities were very neglected after the communist era. We have been trying to make up for that deficit and to modernise our infrastructure, but often, once the necessary repairs are done, there is not enough money for investments in smart city solutions.

For which technologies are we most often short on money?

An example may be multimodal transport hubs – centres combing public parking, mass transport stations, parking for shared cars, scooters, or bicycles, and charging stations for electronic mobility. Such hubs can also be used for work, for example, offer conference rooms that you can rent for a one-hour meeting with a business partner. Or for commercial purposes – this means, for example, lockers to which you can have your internet shop purchase sent. Multimodal transport hubs can offer other services for getting in touch with government administration, to eliminate trips to various public agencies.

Smart cities include a shared economy

Cities are beginning to be crowded and increasingly they regulate traffic. In order for mobility to be effective, people must share means of transport. Carsharing and other digital services are being developed, for example, by .ŠKODA AUTO DigiLab.

How is the Czech Republic doing in smart transport? Are there any interesting projects?

The Czech Republic pays a lot of attention to the smart cities topic. For example, the Czech Republic is the base of one of the five technology hubs of the European project EIT Urban Mobility. This Czech hub finances and manages smart cities projects not only in the Czech Republic, but also in Central and Eastern European countries and in Israel. The project’s key partners include ŠKODA AUTO. Škoda also cooperates on the smart cities concept with Mladá Boleslav. The city is the home of a production plant and often experiences traffic jams during shift changes. Together with the city hall, we are analysing the technological and technical solutions that could be introduced in the city and its area, in order that traffic would run smoothly and not disturb the city’s regular course of affairs.

What ideas did you come up with?

We have several concepts. Naturally, the public transport system and the road infrastructure must be broadened. That also means introducing digital technologies that will help people look for potential connections using a mobile application, and to combine it such that one gets to the place one needs on time. Also passage through the city itself must be improved – for example, by using smart intersections that detect how many cars are coming from which direction. They change cycles dynamically, on the basis of that information. For the main throughways, a system of green waves must be introduced in the city – synchronising cycles through mutual communication between intersections.

In your proposals for Mladá Boleslav, did you address parking problems, as well?

Yes. The concept of smart parking should help in this regard. It is possible to monitor through camera systems or sensors in roads which parking place has a spot available, and to pass that information on through a mobile application. That information will not guarantee the driver that there is still parking available when he actually gets to the parking lot. That is why it is necessary to monitor parking availability and movement of cars through the city on an extended basis. Only with that information can it be forecast whether the place will still be available when the driver arrives. In other words – as it is popular to say these days – using artificial intelligence to estimate the movement of cars and for predicting parking lot availability.

In addition to smart intersections and smart parking, also smart cars are necessary.

Our development pays attention to them, as well. One day, there will definitely be perfect autonomous cars that will really be able to drive on their own and manage all traffic situations. But that is a future ideal, toward which we must work. Today, we identify a total of five automatised and autonomous drive levels. A fully autonomous car is the very last level. At present, we are at level two, where there are various assistance systems available to the driver that allow for automated functions – for example, adaptive cruise control. The car maintains the set speed, and if a slower vehicle appears in front of it, the car automatically slows down. As soon as there is room available in front of the car, for example, when you switch to a faster lane on the motorway, the car automatically accelerates to the set speed.

Level three allows for automatic driving in certain traffic situations, for example, on motorways. When we get on the D10 at Boleslav, we switch the car to the autonomous drive mode and carry on towards Prague. The car hands the driving back to the driver before Černý Most, because it is unable to drive autonomously in Prague. Level four means automatic driving in most traffic situations on motorways, on country roads, and in cities. Situations can occur in which the car cannot manage the drive and will ask the driver to take over. And only in level five cars is there no steering wheel or other controls required for driving.

If currently we are at level two, where the human as the driver has absolute responsibility for any accident, is the car going to be responsible in level five?

This has not yet been defined in any legislation. Only in Germany and in several states in the US are there provisions about the operation of autonomous systems on the road, but under very specific conditions – for example, in test mode. There is an Ethics Committee for Autonomous Driving at the Czech Ministry of Transport now comprised of scientists and lawyers, but also of experts from private enterprises – ŠKODA AUTO, too, has its representative there. The committee is concerned with the issues of ethics and future responsibility. The issue is, nevertheless, very complex and establishing a legal framework will take some time yet.

Where to look for inspiration? For example, in Hamburg!

An excellent example of how the smart cities concept can work is Hamburg – an important port and a huge industrial city with hundreds of thousands of people and cars moving about the city every day. But a city should also be pleasant for the lives of its inhabitants. The City of Hamburg’s concept takes into account all aspects – it pays attention to the development of urban planning, from intelligent buildings to autonomous transport. Currently, they are testing autonomous buses. 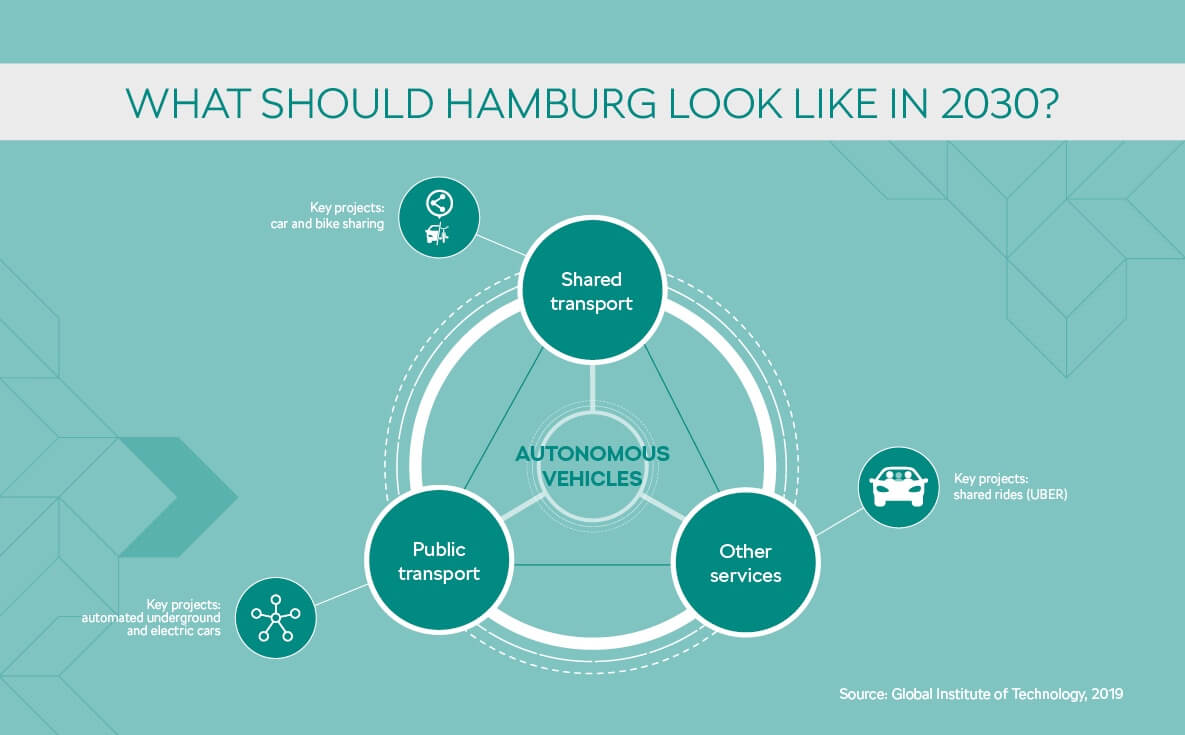 What if autonomous cars encounter regular cars on the roads? Can this not lead to further problems?

We are all afraid of this transitional period. A human as such drives relatively dynamically, very well and is able to quickly decide while on the road. Autonomous systems are more cautious in their decisions. The movement of a self-driving car need not necessarily be as smooth and foreseeable as when it is driven by a human. Such behaviour could take a “live” driver of a non-autonomous car by surprise and ultimately result in an accident.

Is it possible to estimate when we could have smart cities with smart transport?

Even though we, as experts, have our ideas and time-estimates, nobody will tell you and guarantee a precise year. Development is in many regards more complex and more complicated that had initially been assumed. It has to deal with areas such as user experience and psychology. Here, for example, we test how people perceive the feeling that a machine is driving for them, and how willing they are to accept that fact. No car manufacturer will dare let a car out on the road about which it is not one hundred percent certain. This has to do not only with finance, but also people’s trust in the technology itself. So, it will be some time before we get smart cities with purely automated transport.

WE TEACH OTHERS HOW TO ‘CURE’ THE PRODUCTION LINES

ON A DATE WITH ROBOTS